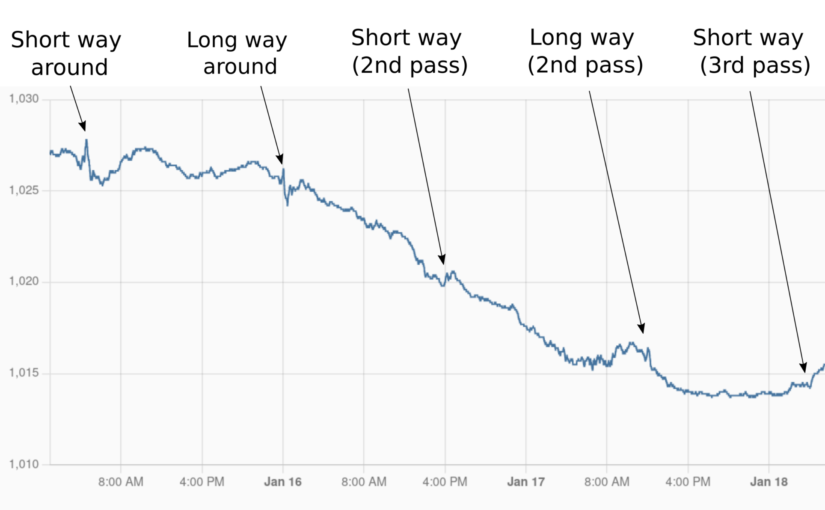 The Tonga eruption on January 14, 2022 sent a big shock wave out in all direction in the atmosphere. I had once read about how the Krakatoa eruption shock wave was measured 7 times going around the world, so I wondered if I could measure it with my weather station. Sure enough, I could!

I have two pressure sensors that update every 30 seconds. One is inside and the other is outside. 8.5 hours after the eruption, the first wave reached my house (traveling directly from Tonga to Seattle). About 15 hours later, another wave reached my house, this one traveling the opposite direction from Tonga to Seattle around the back way. Both of these waves registered well on my sensor.

Given the time of arrival, I figured I could probably predict when to look for the 2nd and maybe even 3rd passes of these waves if they made it all the way around the world multiple times as I had heard about. So I wrote a little python script to predict the times of arrival:

This code prints out the following predictions:

Then I waited. Sure enough, I saw more features for the 2nd passes! The third pass of both waves was arguably detected. The wave was going quiet a bit slower than I predicted, so it must have slowed down over time. The arrivals were between 30 and 60 minutes behind when I had predicted them.

The first 6 sightings of the pressure wave in Seattle

Super fun. I even did my first-ever live stream to see if my first prediction was correct, and of course I tweeted about them a lot.

Super fun. I’ll update the plots if I do see the 4th pass.