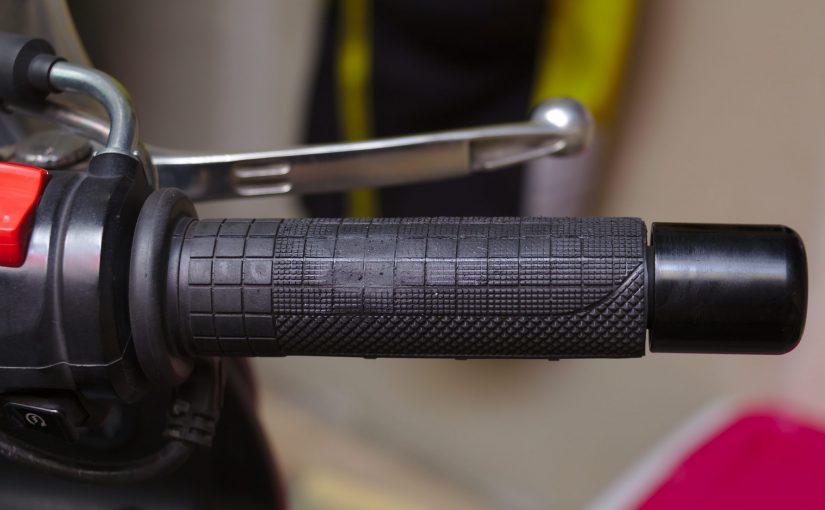 This may be a coincidence but about a week after I got new motorcycle gloves, my Oxford Heater grips started like, deteriorating away. Check this out:

It has been hot recently, but this is still very odd. I got these Street & Steel V-74 gloves from RevZilla. Maybe it’s the Gel Palm leaking out and reacting with the grips? Who knows. Anyway it’s sticky and gross and annoying. Poor Oxford Heaters, I love those things.

Has this happened to anyone else!?

Note: This is a thowback post, revitalized from the old partofthething.com where it was posted by me in like, 2004. I took out most last names. 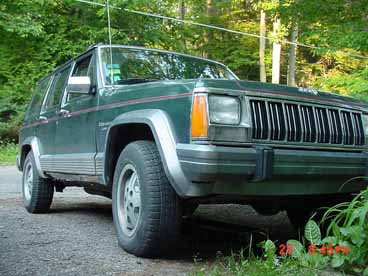 My car is the ultimate car ever. It’s the greatest thing on Earth. No, really. It is. Sure, sure it’s old but that’s not what matters anymore. It’s the past that counts…and the stereo system. I grew up in this car. Yes sir I did. I always sat in the back right seat driving all over the place since I was seven years old. Usually Tom Petty was playing. you see, it used to be my mom’s car. When she got a new one, it became my sister’s car. And then, it became my car.

END_OF_DOCUMENT_TOKEN_TO_BE_REPLACED

I got my first motorcycle,  a 1997 Suzuki GS500, in 2007. It was great for a long time. I cut my motorcycle maintenance teeth on it, starting with gas line issues, shim adjustments, and an oil leak fix. Things escalated to taking the pistons out and head off to get the top-end rebuilt. Issues kept popping up more frequently than I liked so I sold it in 2012 and got a brand new Suzuki DL650A V-Strom ABS (aka “Glee”), feeling like I had had enough maintenance for a while. I only felt a little shame when I took it in to the shop for some routine maintenance

Well…I guess I’m back in the routine. After I totaled it but kept it, I got warmed up doing basic maintenance stuff on it. So when an issue came up recently, I decided to fix it myself.

UPDATE Jan 2017: Whaddaya know? The stator was just recalled due to a tendancy for this to happen.

END_OF_DOCUMENT_TOKEN_TO_BE_REPLACED

My dad sold me a ’97 Jeep for $1 in 2006. It had originally come from Kentucky via my older sister. He sold it to me because I was about to drive from Michigan to Idaho and I’d need a reliable vehicle. The Jeep carried me across the country, taking me to the northwest for the first time, where I saw Yellowstone, the Tetons, and my first tumbleweed.

Once in Idaho, I took it hiking and camping every weekend. Into the mountains, through small rivers, out rock climbing. The one day I woke up in a tent surrounded by 10″ of snow on a mountainside, it delivered me to safety. Since then, the Jeep and I have been through a lot together and as a result I felt a surprisingly close connection with a completely inanimate object.

On August 15 2012, 6 years since it entered my life, I watched the Jeep get towed out of my parking garage by a wrecker, all up on a dolly and everything. It was totalled.

One nice August Saturday night, I threw a big party at my apartment. A “moving out soon” party, even though I wasn’t moving out for another month. I went to Costco to get supplies and unloaded lots of stuff from the Jeep and took it up. Everyone came and it was lots of fun. The next day, I slept in and eventually went somewhere late in the afternoon. I was going to motorcycle, but realized I couldn’t find the garage door clicker. I checked in the Jeep, where I realized I must have left it while unloading that big Costco load. It was then that I noticed something peculiar: the seats were reclined! Someone had been in my car! Oh well, no surprise, people get in this garage all the time and mess around in people’s cars. They had punched out my window once to steal a $10 item so since then I just left my doors unlocked. Obviously someone had just hung out for a while. I didn’t see the garage door opener. What I did find, however, was an unfamiliar cell phone. I took it up to my apartment. I manually overrode the garage door and went about my business.

Scene: Tuesday night. I come rolling in from work on the motorcycle, late for my soccer game. I have to change quickly and get going. As I’m heading out, I notice something funny with the Jeep. At closer look, the radio is ripped out! And the interior is all spray painted blue! The dashboard is completely blue. The center console is opened and everything in there is blue. The carpet is blue. The trim is blue. Everything’s blue. The radio isn’t stolen. No, it is just dangling by some wires. Blue wires. What’s worse is that the ignition is all chewed up and mangled. There’s no way to get a key in. Someone tried to jack a ’97 Jeep with 193k miles. Mother fucker.

So the cops come out and spend an hour dusting for fingerprints. They ask me a bunch of questions and I give them the cell phone. “Have you pissed anyone off recently? Like, did you maybe cut someone off without noticing?” No, I tell them. Not that I can think of. “Any psycho exes or anything?” Well, maybe… but not this psycho. I tell them that the video will tell all. Once I get a hold of the building guy and look at the videos, everything will become clear. They agree and head out.

As I’m pulling some stuff out to take upstairs, a neighbor comes down and I tell him the story. “Hey is the spray paint blue?” he asks. “Because there’s a blue can of spray paint under this car!” I call the cops right back and they come pick up the can to take it to the lab.

The next day, I got some video from the building guy. It showed a long-haired 40-year old guy buzzing everyone at the apartment at 3:30am Saturday night until someone let him in. He saunters into the lobby and props open the doors to the garage. Seconds later, a young couple emerges from the elevator (likely to see who they just buzzed in). They look around confusedly and point to the garage a few times and then close the doors. Now, the thing about my garage is that there has been a lot of trespassing, and so the building guy made it impossible to leave without a key. Surely that’s a fire code violation, but whatever. The effect was that this long-haired fellow was now locked in the garage.

The videos show him walking around a bit but not much more. I was disappointed and knew there must be more footage. I gave it to the cops anyway. The detective called and said, find more footage, this gives us nothing. I got the building guy to let me look for more details and I found them.

The guy had clearly slept in my car. He slept in there until about noon on Sunday! If only I had gone down earlier! Why was my party so good?! My neighbors even saw that there was a guy in there but didn’t know my number to call me and they were in a hurry so they just ran off without saying anything. He wakes up at noon and grabs a box of fluorescent lights and walks off. In doing so, we get a nice look at his face.

But then the good stuff happens. 3:30pm Tuesday, here he comes! Walking in all cool. He opens the passenger door and rummages around for a while, probably looking for that cell phone! He doesn’t find it and starts walking out. But wait! He turns around and heads over to where he got the lights from. Grabs a can of spray paint from the paint shed, and goes back to the car to do the damage. Apparently he wasn’t satisfied with the customer service of my Jeep.

Now that it was obvious that the guy had my clicker (my fault for leaving it in the car… so stupid!), I was able to convince the building to change the code on the gate. Since my window had been punched earlier, I had comprehensive insurance on that old car (unheard of for ~200k miles!) so I got way more for the jeep than I could ever have sold it for. The detective is actually on the case and has some leads.

In fact, they’ve positively identified the guy with fingerprints on the spray paint can and are prosecuting on behalf of the insurance company. Justice will be served. I’m only a little worried that this vengeful bastard will be even more vengeful after the prosecution starts! Conveniently I’m moving in like a week.

Meanwhile I joined the rest of my Seattle brethren and got, of all things, a Subaru. It’s no Jeep, that’s for sure. And women have already ridiculed me: “Why don’t you just put a car seat in there too, hahaha!” But I just couldn’t justify the hilariously low gas mileage of the Xtera, which was really the only SUV short enough to fit a motorcycle in the same parking spot as it (essential in the city: Jeeps are incredibly short!). This thing will get me to the trail heads and the ski hill, and to be perfectly honest I haven’t used the Jeep for rock crawling since ’07.

Moral of the story: lock your doors, don’t leave garage door clickers in your car, don’t buzz people in your apartment at 3:30am who you don’t know, leave arbitrary cell phones where they are, and have comprehensive insurance.

The good new is, the only valuable things in the jeep were left untouched: the flux capacitor and the subwoofer my friend Karl gave me in 2002.