Note: This is a thowback post, revitalized from the old partofthething.com where it was posted by me in like, 2004. I took out most last names.

My car is the ultimate car ever. It’s the greatest thing on Earth. No, really. It is. Sure, sure it’s old but that’s not what matters anymore. It’s the past that counts…and the stereo system. I grew up in this car. Yes sir I did. I always sat in the back right seat driving all over the place since I was seven years old. Usually Tom Petty was playing. you see, it used to be my mom’s car. When she got a new one, it became my sister’s car. And then, it became my car.

Baby’s packed with stuff. All stored neatly away and out of sight to a normal passenger. 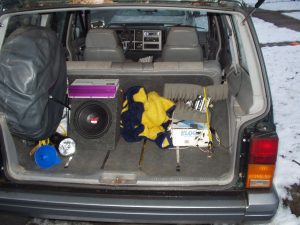 This system is amazing. I mean, it rocks. I can be driving along watching my graphics analyzer go to town and play any of thousands of songs with a quick peck at my up-front keyboard. I can load playlists on the run, check shuffle status, anything instantly. I can play almost any song that comes to my head instantly without shuffling CDs or anything. It has great sound coming from the super highs and deep lows.

It all started when my tape player stopped working. I needed it for my adapter to play CDs. I went out and got the Aiwa receiver from Crutchfield. I gave the old deck to Stephanie Fettig for her Wrangler. She just wanted radio.

Then came the subwoofer. I was at Karl R’s house and his mom said: “Oh, hey Karl, you should see if we can get rid of that sound thing in the basement.” Karl said, “Oh yeah, hey anyone want my old subwoofer? My new car has one built in. You’ll need an amp though…”

Adam R then said: “Hey, I have an old 600 Watt amp in my basement that I was going to try to explode by running AC through it, you can have it I guess.”

Super. So I had it installed a day later or something. It sounded great. Later on, summer came by…

Mid-summer 2003, 10:00 PM Adam R called, bored. We talk about stuff and I mention that I’ve always sort of wanted like, a computer in my car to play songs. He thought it sounded like a good idea. We talked it over and decided it could be done in my car, since I have an auxiliary input and stuff. We decided to try it right then. So we planned on meeting at Wal-Mart in 20 minutes. I called Dave and told him to come too. I bought an inverter at the store and we came back to my place. I got an old computer’s motherboard out and set it in the first box I saw in the garage, a Klogs box. It fit perfectly. We set it up and cut some holes and ran some wires up the middle of my car there in my driveway under the thousand watt floodlights. Soon, we had a monitor in my trunk and were trying to get it all to work right. And then…with the Microsoft sound of windows 98 reverberated through the trees, it was born!

My spare time during the next week was spent running the wires correctly through the trim, out of the way, getting the horrid ground loop that comes with powering stereos off of inverters to go away, installing the button and switch in my dashboard, and tweaking the computer software to work how I wanted it to. The thing worked, but it wasn’t robust. I got some foam egg stuff from Meyer’s to keep the hard drives from being exposed to big shocks. I hadn’t quite learned all the methods of working the computer without the monitor at this time, so whenever I’d show a girl, it wouldn’t work. but when I showed my friends or myself, it worked fine. Go figure. I then spent a week working on the crazy idea of having it voice activated. It worked, to a point. I had it so I could say: “computer! winamp. Song search. led zeppelin. stairway to heaven. play” and a few seconds later, it would play. It really was amazing and fun, BUT, there were two problems. First of all, the computer was too slow to process voices. There was almost a 10 second delay between saying play and hearing music. It was a pain. Second, when the car is running, there is too much noise for my microphone to properly pick out my voice. Especially if music is playing or people are talking. So voice is out. Keyboard is in, and it works great. Voice will come when the technology gets a bit better. give it five years.

By fall, I had figured out everything. I knew how to make the thing turn on every time. Everything was cool and good.

I was bored. Really bored. I decided that I wanted an LCD display. I spent a whole day looking up info on them. Then I decided I’d buy one. So I did. I had it shipped to Ann Arbor because I knew it’d take that long. In the meantime, I made playlists and simulation LCD setups on my computer. By the end of break, I had everything set up and configured so that all I had to do was plug the thing in. My parents then decided to fund the project for my birthday.

Wed Jan 07, 2004: All my parts were in the dorm but it was late at night when I got them. I plugged everything in and it worked instantly off my computer in my room. It was really cool.

Thu Jan 08, 2004: I brought the car computer to the room and got everything working. I then soldered in the (harnessed) power connections for the backlight and let it rip. Everything worked great and I practiced using it for a while with a screen. Then, I went to the car and ran the LCD wires through the trim. Fired it up and everything worked. Ever since, I’ve been knowing how awesome I and my car stereo system really are.

Nov 19, 2005 So over the summer, a girl broke the screen on her laptop. She gave it to me and it’s now the car computer. The only condition was that I had to keep the photo of the horse taped to it. So now I have a 1.5Ghz laptop running everything instead of the somewhat unstable carboard box computer. Sweet!

The computer audio system (CAS) was designed to be modular. The computer itself can be removed or installed in less than thirty seconds. Just plug in the power, keyboard, and LCD data wire to the computer, attach the power-switch/ground harness to it’s mate, and plug the LCD backlight power in to a free power plug from the computer and you’re good to go. It’s even easier to take out. The LCD screen is also modular. The serial cable unplugs and the backlight power cable is harnessed. So I can remove it when I don’t want it stolen or frozen. The subwoofer and computer can be completely hidden from view with a big U of M blanket. The receiver has a detachable faceplate. Whenever I leave the car on the street for an extended amount of time, all anyone could see walking would be an upside-down keyboard and a serial cable. Who’d steal that?

The Jeep lives on! I had to drive to Idaho in 2005 and didn’t think the 1991 JEEP CHEROKEE LAREDO would make it. We sold it for like, several dollars to a guy on Beaver Island, where I’m sure it still is today, running just fine.

I still use the subwoofer amplifier that Adam gave me and the sub box that Karl gave me. The original subwoofer itself has passed on as must we all when our time comes.

After that Jeep, I got a 1997 Jeep Cherokee and moved all the stereo equipment and flux capacitors into it. It lasted until it got totaled by a vandal in my garage, but that is another story.

One thought on “Jeep Cherokee Laredo 1991”