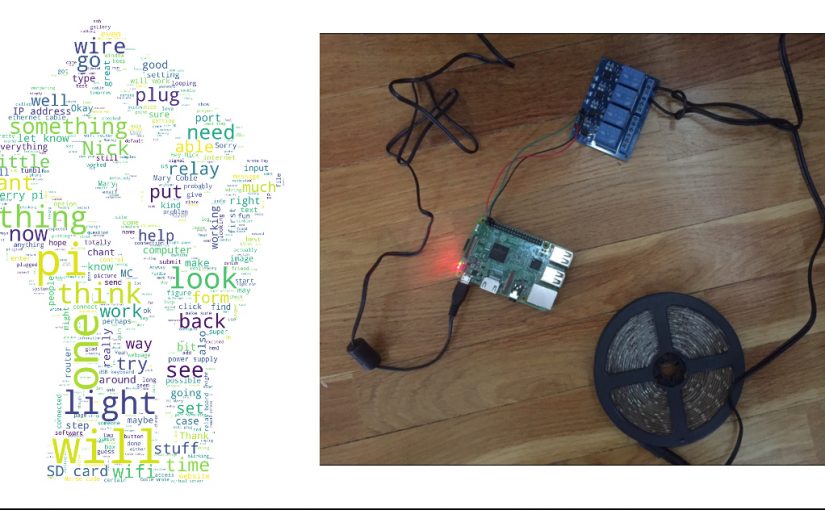 A few months ago, I got an email from a Sweden-based artist and teacher named MC Coble asking if my Morse code laser post could be helpful for an art installation they were working on. MC used Morse code in previous installations like one in Toronto where they sent coded light from a giant dome to people below who then relayed signals with flashlights. As a part of a new project, MC wanted people to be able to enter protest chants into a website and then have a system convert the message to code and flash a light in a gallery window. Did I want to help? You bet I did!

I got super excited about the prospect of helping with this and knew that with a combination of things I’ve used before it would be really doable. The plan was to have a webserver accept messages from a form and transmit them to a Raspberry Pi (cheap mini-computer), which would then flip pins on a relay to blink the light, like this:

After many emails and some ups and downs, everything worked! This really feels like how the internet is supposed to work.

There was a lot to do.

MC, having conceived of the system and being there to build it, had to do all the hardware. This involved:

A few trips to the electronics store later (I forgot to tell them to buy little wires), they had it all rigged up for me to swoop in over the internet and build the control software.

I’ve done lots of automation, command/control, relay work in software so I knew that if I could remote-access the Pi,  we could get things running relatively easily. Getting me that access required that MC open up a port on their router and set up the Raspberry Pi to listen for me knocking (including flashing Raspbian onto the SD card and setting up headless wifi and ssh). MC figured out how to do that all and I ssh’d in; it worked! Then the software work entailed:

The program on the Pi got slightly more complicated than I was totally comfortable with since I knew it’d be hard to update it once it was installed. It has a thread listening for incoming messages and another one flipping the relay. But MC tested it out pretty well before installing in and I feel pretty good. MC sent me a video of the first blinks:

MC’s installation, ACTING IN NUMBERS is at Galleri Image in Aarhus, Denmark, from Jan. 12 to Feb. 25th, 2018. The blinking protest chant light is just one little element to the project. Here’s a video of it that MC took during setup:

Here’s a wordcloud of our emails back and forth.

I really had a great time with this and am honored to have been part of a cool art installation halfway around the world. (Thanks MC!) So, if you’re around Denmark this month, go check it out and submit a protest chant!

UPDATE (2018-09-01) Another bigger version of this project was built and installed (also by MC) for the SHOUT FIRE exhibit at the Röda Sten Konsthall, in Göteborg, Sweden.