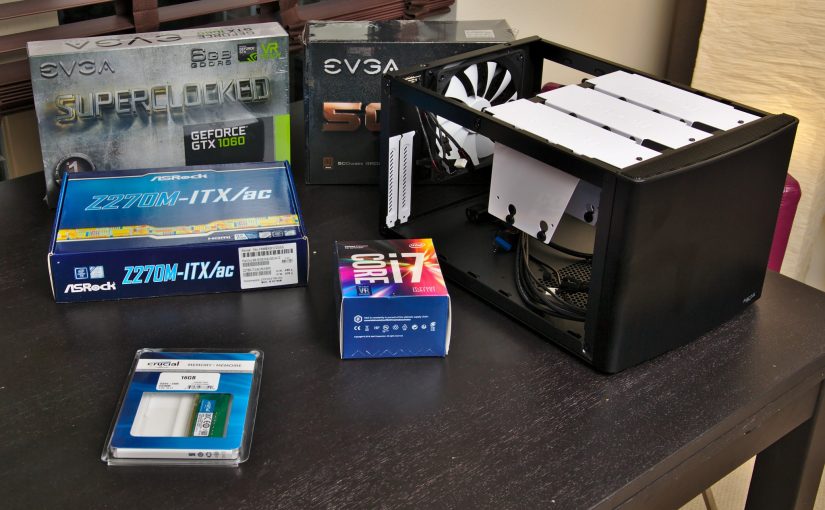 I decided I wanted a network-attached storage (NAS) server because I needed some central and safe place to put all my big files. I’ve been using more and more hard drive space because I’ve been taking photos in RAW and collecting more digital video (camera, dashcam, digitized home videos from the 1990s, and drone). I also just enjoy fiddling with servers and stuff and thought I could use a home server for a variety of other things. My raspberry pi has been doing well for my home automation but a bigger server might make it faster. I’m trying to learn Blender and have been eyeing a Machine Learning course. Both of those require a nice modern GPU. Finally, I just enjoy learning things about computers.

I wanted some redundancy in my storage, so if a hard drive fails in 6 years I don’t lose all my data. A good off-site backup schedule is the best way to handle this, but that’s kind of hard and I wish it were more automated. I considered the following options:

I decided to just do ZFS mirroring because I only wanted to buy 2 drives for now. If I upgrade later I can migrate the whole thing to RAID-Z1. I just really wanted to try out this ZFS business.

First step was choosing a motherboard and processor. My niche is a combination of serious but power-efficient NAS with goofing around with GPU stuff. So I was looking for:

For a CPU, I was surprised that my 2011 laptop CPU is still doing pretty well with a Passmark score of 6,619 and a power rating of 45 Watts. The speeds really have kind of slowed down in growth.

For size, I decided Mini-ITX form factor was right. Most motherboards of this size that support ECC RAM are pretty pricey and take power-hungry Xeon processors. This guy got a $1000 board, which is badass but I was hoping to stay a price range below that or two. After a very long time of searching and weighing options, I decided that probability of non-ECC RAM errors is low and just went with regular RAM. I found a nice 25W processor that gets a 9400 Passmark (Intel 7700T). During this search, I found the wikipedia lists of i7 processors (and the i5, i3s too) very useful. It appears that for ECC RAM support you either need a slowish i3 or a super-expensive and powerful Xeon. The i3-7100T is a solid low-power contender but I just couldn’t stomach buying something slower than my 2011 laptop because I wanted this thing to triple as a Blender renderfarm.

I found an epic board that had all the bells and whistles I wanted: the ASRock Z270M-ITX/ac. Not only does it have dual gigabit LAN but it also has wifi, so I can make a neighborhood upsidedown-ternet if I want, long a dream I’ve had.

For cases, I found the Fractal design Node 304 which was nice in that it was small and had room for up to 6 hard drives. Nice!

For hard drives, I went with two Red series Western Digital 8TB NAS drives. They’re spinning platters but are low-ish power and are spec’d out to last forever. I also discovered that there are now these things called M.2 ports on motherboards that you can plug little tiny SSD hard drives into for your operating system (last PC build I did was in 2002). So I grabbed a 500GB SSD for that.

For Machine Learning, I knew I wanted a nVidia drive since they have CUDA and that seems to be used by most of the libraries I’ve looked at. I found a lot of nice webpages where people basically said that The nVidia 1070 with 6GB was fine for learning and up to medium-sized real problems, though for large practical problems it may struggle a bit. Since my goal is mostly to learn some ML I figured it was a perfect middle-of-the-road compromise. I was also wary of getting too much of a beast since I want this to be sort of a contradiction: cheap, low power, and powerful/future proof.

Building was pretty easy. When I turned it on at first it didn’t bring up the screen. I had it plugged into a TV monitor through one of the motherboard HDMI port and tried switching it around. Eventually I discovered that it had to be in the nVidia GPU (bios gives it preference by default) and that the TV had to be plugged in when the PC booted. Up came the bios and I was a happy person.

I knew I was going a bit overboard on power consumption when I got the GPU but I wasn’t sure how bad it would be. My two WD hard drives came a few days after I put the original parts together and I was happy to see a 25 Watt idle power consumption without them. When they came and I added them, I got a 40 Watt usage when this thing is under light load, peaking around 70 Watts. At 11 cents/kWh, that’ll cost $40/year to run continuously, compared to $5/year for my Raspberry Pi. Not too bad, but maybe I’ll let the Pi keep running the home automation system for now and turn the NAS on when needed.

There are some great choices to make your NAS system easy to administer such as FreeNAS.  Most people will enjoy using that. Personally, I’ve been avoiding pre-built applications like this because I like fiddling around a a lower level so I know how everything works. Of course, if you don’t like spending hours learning this crap, then don’t bother! I went with Ubuntu 17.04 which like most linuxes has ZFS and NAS and Samba and all the good stuff. I installed it via a USB drive and installed all my favorite programs, set up SSH, got the nVidia proprietary drivers, and we’re off.

Getting the ZFS mirror up and running was trivial. Once I figured out what my 8TB drives were called, I ran:

Sharing it over NFS on my local network is nearly trivial as well:

And then I started filling it up. I plugged my laptop into my Gig ethernet port with a hard-wire and copied over 500 GB of stuff. It was fast! Sweet! For Windows sharing, I’ll have to set up Samba eventually if my wife wants to join in on this fun. For now NFS is enough.

I learned about ZFS snapshots and they blew my mind. It’s like version control for your hard drive. So if you delete everything, you can just roll back.

It was at this point that I started wondering about permissions and user management. How can I control access among the PCs on my local network? As it turns out, NAS by default just does UID matching, so if user nick has UID 1004 on the server and user sketchy-friend comes by and hooks up to my wifi and sets his UID to 1004 as well, then NFS will serve him files as if he were I. This is fine for a home usually unless you have capable teenager hacker children. NFS4 supports Kerberos encryption so I’m going to have to figure that out too and see if I can get it working since it seems a bit more robust.

So, how to remote control this thing? Obviously SSH works fine for text-based management, which I’m used to on my webserver and at work. But I want some GUI action on this guy, specifically:

Darktable (and many other programs) is easy, just ssh in with -XC or -Y to forward X graphics and run it from the command line. It pops up on the client PC and works great.

For the rest, there are plenty of problems. If you try to run Blender with X forwarding, you get:

Turns out 3D hardware acceleration doesn’t transfer over X too well. This is the same problem you get if you try to run Gnome3. Well maybe I can get VNC to work. I read all about this remote access X thing called XDMCP and had trouble getting it to work. After struggling forever I found the following out:

First thing is first. The computer booted and no one is logged in. How do we get a GUI going remotely. To get remote access to the GDM3 login screen, I did this:

Note that none of this is secure and VNC sends everything over the LAN unencrypted so if any nefarious characters are on your Wifi you should not use this (at least without using SSH tunneling of the VNC stuff).

On second thought, if I just wanted to run blender, I could configure the vnc server to start a gnome-session (or something more lightweight) on a Xorg instance when it starts up. The only disadvantage of that is that it won’t control the actual TV for media server use.

Anyway none of this is ideal yet but I’m making progress. If you know of better or cleaner ways, please let me know!!

There’s a lot to do still, including setting up the Machine Learning libraries, getting Samba going, configuring Kodi for the media server, tweaking power settings, etc. I’ll keep in touch if anything neat happens.

5 thoughts on “Building a NAS server/home server in 2017”